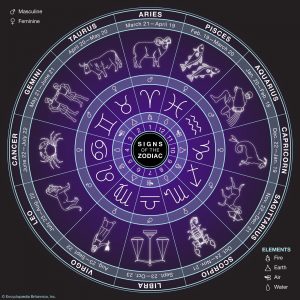 Human beings carry in them different traits and attitudes which creates the distinction between each person. Some people are naturally sassy, confident, rude, courteous etc. The funny thing is most people attribute their behaviour to their zodiac signs? Like really? You do something terrible and you say its not your fault, its your zodiac sign that is responsible for your actions. So what is a zodiac sign. Let’s do a little history.

The concept of the zodiac originated in Babylonian astrology, and was later influenced by Hellenistic culture. According to astrology, celestial phenomena relate to human activity on the principle of “as above, so below”, so that the signs are held to represent characteristic modes of expression.Modern discoveries about the true nature of celestial objects have undermined the theoretical basis for assigning meaning to astrological signs, and empirical scientific investigation has shown that predictions and recommendations based on these systems are not accurate.Astrology is generally regarded as pseudoscience.

In simpler terms,Your Zodiac sign, or star sign, reflects the position of the sun when you were born. With its strong influence on your personality, character, and emotions, your sign is a powerful tool for understanding yourself and your relationships. And of course, your sign can show you the way to an incredible life. There are 12 zodiac signs which runs through the 12 months of the year and the zodiac carries one of the four elements in the world- Fire, water, air, earth. If you’ve watched Avatar you should know what am talking about. Let’s take a look at them shall we? Then you can know which sign you belong to. Be sure to read up the character traits of each sign

There you have it, the 12 Zodiac signs in all its glory. But let us look at something very important about this issue. People these days do not care to work on their character they quicķly remind you of their zodiac sign and tell you they cannot change anything about themselves. Do not be deceived o if you notice you have a bad attitude and have been told by alot of people about that, please find ways to change. These traits were created by scientists who are humans. Always strive to be a better version of yourself; whatever bad attribute your zodiac sign gives should not necessarily make its way into your life and control it. If there is anyone who has the power to make decisions in your life, it should be you. Make hay, mould your character like clay so that when all is done, you can boldly hit your chest and say “I am a product of my hardwork” Like Ebuka Obi- Uchendu said “Na Snake wey no get poison, dem go use tie firewood”

It's another day of learning about the

Every Wednesday, we shall be learning something

Pride and confidence: The thin line