city not found
HomeDevelopmentPride and confidence: The thin line

Pride and confidence: The thin line 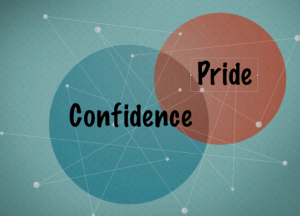 The term pride and confidence are often juxtaposed to mean the same thing because it is difficult a whole lot of times to tell the two apart in a person’s behaviour. According to the Cambridge English Dictionary, confidence is the quality of being certain of your abilities or of having trust in people, places or the future.
According to wikipedia, Confidence is a state of being clear headed either that a hypothesis or prediction is correct or that a chosen course of action is the best or most effective.
Confidence comes from the Latin word “fidere” which means to trust. Therefore having self confidence is having trust in one’s self. The concept of self confidence is commonly used as self assurance in one’s personal judgement, ability, power etc. One’s self confidence increases from experiences of having satisfactorily completed particular activities. An amazing synonym of confidence is Bravura which means great skill, enthusiasm and confidence. Another way confidence can be described is through the word, Triumphalism which means the attitude or behaviour of someone who shows they are very proud of their own success or victory.
Pride is a lofty and often arrogant assumption of superiority over others. It can be termed as egotism or vainglory. According to the Cambridge English Dictionary, Pride is a feeling of pleasure and satisfaction that you get because you or people connected with you have done or got something good. According to Merriam Webster Dictionary, Pride is described as a feeling that you respect yourself and deserve to be respected by others. A proud person can also be called a narcissist.
As earlier stated, it is near impossible to tell the difference between acts inspired by self confidence and acts motivated by pride. Here are a few points to note:
● Comparison and egotism are entourages of pride. The need to validate one’s self by comparing certain achievements with another person they view as a threat. So instead of using a good standard as a yardstick to measure progress, they use other people. Its like they are running a marathon against someone to prove that they are the best. An example can be deduced using a private organisation.. its no news that there is high level of competition in private firms and its in such places you find proud people. Every employee has to be on their toes to accomplish certain tasks within a limited period of time. You find pride manifesting amongst the best employees who are competing against each other to please the boss. A self confident person on the other hand does not see the need to compete with others as he believes that his work is good enough and will speak on his behalf. Pride says “I am better than others” self confidence says ” I am good at what I do and so is everyone else”
● Pride belittles people. A person buffed up with pride uses every given opportunity to talk people down and make them feel inferior. They usually enjoy making people doubt themselves and alway show off their achievements in people’s face. A selfconfident person does not see the joy in talking down on people. He rather finds a way to help people build their self esteem since he has a high one.
● A proud person is not a team player. Due to the need to feel recognized for certain victories, he wouldn’t want to be paired up with anyone inorder to work on a project. He craves attention and so prefers to be a lone wolf so that when the work is done, he receives the accolade. A self confident person sees the need to work with others as an opportunity to learn new things and improve his skills.
● On the flip side, if a proud person is forced to be a member of a group, he fights to become the leader of that group so that he can dish our orders. Having people do his bidding fans his ego. A typical example can be drawn from group assignments in the university. In every group, there has to be a leader and every member has the right to make contributions but most times, the leader doesn’t take the group members input into consideration; he wants to control everything about the assignment and even be the one to do the presentation. 80% of the time, groups with a proud leader end up getting the lowest score from the lecturer. A self confident person doesn’t care about what role he plays in a group project; he is always happy to give his input when needed to ensure the success of the project
● A proud person never apologizes when he is wrong. He believes he is perfect and cannot make mistakes and even when something goes wrong and is clearly his fault, he finds a way to throw someone else under the bus to save his own skin. A self confident person is always ready to own up to his mistakes because he sees it as a stepping stone to future successes. He is also always ready to defend and cover up for his colleagues.
● A proud person is not trustworthy. Any little hic cup and he turns the table around on you so that he looks like the good guy. A self confident person is reliable.
There is a thin line between pride and confidence but it is also a very broad one. It takes a split second for confidence to become pride. Watch yourself and choose wisely

Pride and confidence: the thin line

Pride and Confidence: The Thin Line The term

Pride and confidence: the thin line