city not found
HomeScienceCano Cristales- The river of five colors 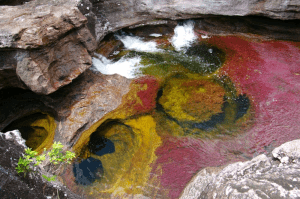 Cano Cristales translated as Crystal Channel has been described by National Geographic as the river from the Garden of Eden. It is located in the Columbian National park of La Macarena, stretching to 62.1 miles long. Liquid rainbow as it is called, the bed of the River is bright red, yellow, green, blue and black for the months that conditions are right. The colors are produced during the reproductive process of the aquatic plants in the river which are called Macarena Clavigera, a species of the River weed family to Podostemaceae. The River seemingly runs red when the River weed is in bloom; the peak time is between July and November.

We have been exposed to yet again another beautiful information on Nature that we may not be aware of.

Every Wednesday, we shall be learning something

Welcome to WordPress. This is your first